People who love to dance will tell you, it’s not just something that happens at night, it happens whenever the music comes on. At the Electric Zoo Festival in New York City, thousands of people gather to dance to some of the world’s most famous DJs all day and well into the night, regardless of the weather. Although it’s been billed as one of the hottest summer parties in the city, organizers go to great lengths to implement the latest technology in crowd cooling to ensure the attendees are comfortable and safe.

Since 2009, the three-day festival has been held annually on Randall's Island off of Manhattan over the long Labor Day Weekend, which falls on the first Monday in September. At that time of year, the average temperature is around 80º F (26º C), but has been known to soar as high as 100º F (37º C). Several comparable summer festivals around the world experience similar temperatures, and safety is generally a chief concern.

“Although things like water stations and misting cannons aren’t particularly memorable items, they contribute significantly to a positive overall experience," said Rutger Jansen, CEO of Backbone North America, and Director of Production and Operations of SFX Entertainment. "They’re essential for the growth of events like ours, which has already expanded to other locations around the globe."

"Heat-related illnesses have become a huge issue across the entire industry, so our first priority is always the safety and comfort of our attendees." 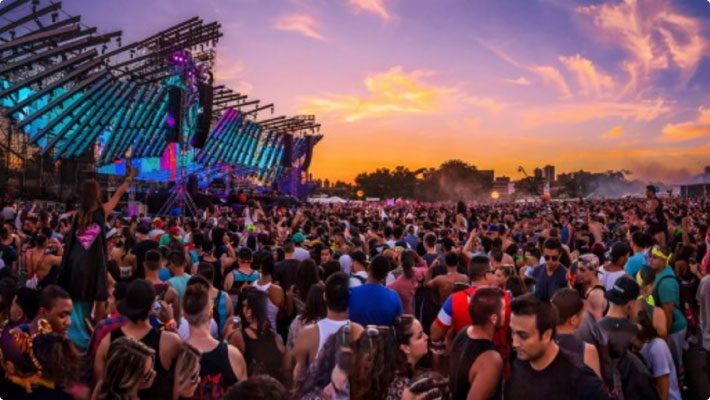 With the 2016 theme of “Wild Island,” Electric Zoo was separated into three large stages. Roughly 30,000 patrons per day streamed through the gate, ready to watch their favorite DJs and dance to several types of electronic music. Entering the festival, ticketholders were welcomed by a shaded forest with zoo-themed art, which was transformed at night into a labyrinth of trees lit with multicolored lights interspersed with neon animals. The wooded area opened into a boomerang-shaped field lined with merchandise booths, food stalls, cocktail lounges, VIP areas, water stations, aid stations, bathrooms and lockers. As attendees danced into the night, staffers wearing animal costumes -- both on foot and on stilts -- wandered through the crowd, adding to the feel of being immersed in a futuristic safari.

Shaped in the form of a giant 72-foot-tall cobra, the massive main stage was equipped with hundreds of lasers, lights and other effects, overlooking a large grassy area. The two secondary stages offered different themes: an octopus with writhing tentacles called the “Riverside Stage” was set in front of an open grass area and the “Hilltop Arena” stage was enclosed by a large tent placed on a cement base, giving it a dark nightclub feel. 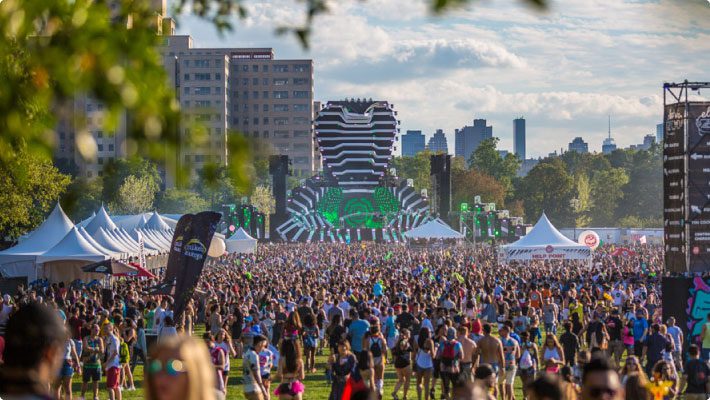 Attendees exit the forest into a large festival area full of activities.

The type of surface patrons stand on to watch these stages is significant, because cement can absorb and retain more heat than grass, raising the temperature of the crowd. However, a grassy area does not necessarily mean a lower temperature. The tightly compacted mass of people vigorously dancing contributes significantly to the heat, regardless of the surface.

“When a crowded and active area is in the direct sun with no wind, even though the forecast says 80 degrees, the temperature can seem like it’s over 100 degrees,” Jansen explained. “That’s when we get the most activity at our medical aid stations.”

Long-term exposure to heat and sun, along with vigorous physical activity, can result in heat-related maladies such as dehydration, severe sunburns, heat exhaustion and sunstroke. Although the symptoms can vary based upon the severity, the results for all four generally require a visit to one of the three permit-mandated medical aid stations at the event. Two stations were located near the main stage, where organizers identified the most heat-related problems, and one near the entrance closest to where ambulances arrive.

Also required in the permit were water refill stations, which were located throughout the grounds. Organizers exceeded the regulatory obligations by training special staff, called “ambassadors,” to identify patrons displaying signs of potential heat-related illnesses. Once the ambassador recognized symptoms, the individuals were safely escorted to water stations, shaded rest areas or medical aid stations, depending on their needs.

“Regulators often take cues from organizers and adjust their requirements for future festivals,” Jansen continued. “For example, when organizers began offering water stations, over time, permits started requiring them. I’m pretty sure that because we’ve been using atomized mist for a couple of years now, we’re going to start seeing it mentioned on permits for summer events. Mostly because the devices work.”

Three KoolBoss atomized misting machines were strategically placed on the festival grounds, disbursing tiny water droplets over a wide area with their powerful fans. Two were positioned in the middle of the crowd near the main stage, and another was set on the right side of the Riverside Stage. The devices lowered the ambient temperature, improving the comfort and safety of the crowd. The KoolBoss propels a long cone of cooling mist that reaches out over the crowd.

“The main stage units were placed back-to-back and set to oscillate 70º to cover a large portion of the crowd, from in front of the stage all the way to the back,” Jansen explained. “We’ve found the crowd is most dense nearest to the stage, so having a unit on the Riverside Stage close to the front -- oscillating high over the crowd to reach farther back -- keeps the area comfortable."

The KoolBoss has a spray manifold on the front end of a heavy-duty barrel design with a powerful internal ducted fan in the back. The “cannon” propels a long cone-shaped plume of engineered mist as far as 100 feet (30 m) through the air. Attached to the manifold, specially designed atomizing nozzles fracture pressurized water into millions of droplets approximately 50-200 microns in size – roughly the diameter of an average human hair and light enough to travel long distances on ambient air currents. As the droplets move through the air, they evaporate -- beginning with the smaller sizes first -- raising the relative humidity of the area and significantly lowering the temperature. 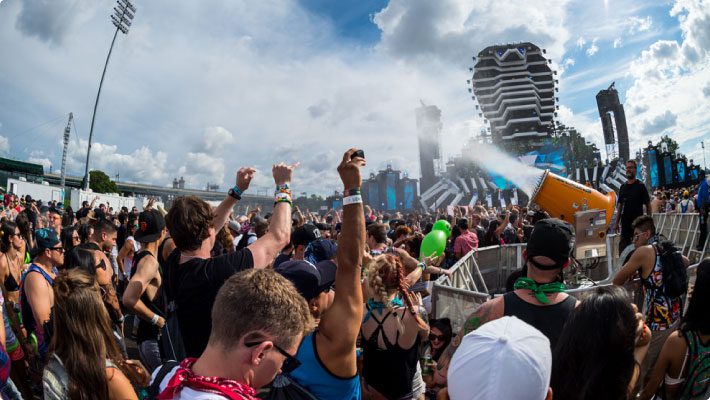 KoolBoss in the midst of the crowd preventing heat-related illnesses.

The units at Electric Zoo had a 70º horizontal automatic rotation range with a 0-50º vertical adjustment, but machines are also available with a 359º oscillator that allows a single unit to cover 31,000 square feet (2,880 square meters), or approximately half of an American football field. Mounted on a wheeled carriage, the KoolBoss can be easily moved throughout the festival grounds and pointed to areas of need. However, organizers chose to place the machines in a fixed location in the middle of the crowd and connect them to municipal water spigots using a standard garden hose. Although the crowd surrounded the units, attendees found that the noise they emitted was not disruptive to the music in a festival setting. 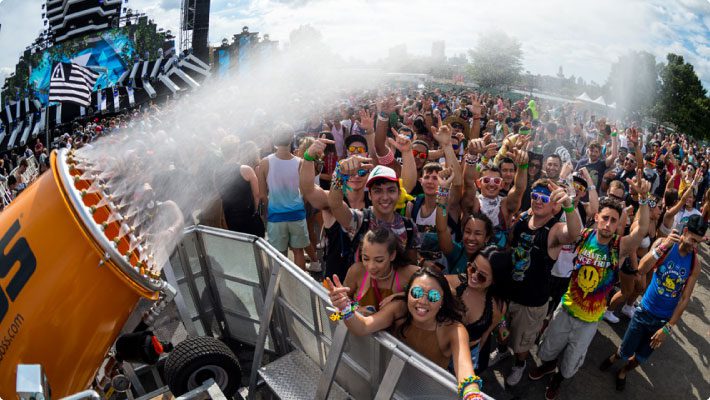 Fans cheer as the KoolBoss mist is turned on and begins cooling the area.

"The crowd literally turned away from the DJ and started dancing in the spray."

“The fans on the machines were blowing for most of the day, but because the temperature for the festival this year was pretty manageable, we didn’t need to turn on the mist until mid-afternoon,” Jansen pointed out. “But when we turned the water on, people really gravitated toward them."

Patrons standing a few feet from the machines experienced more mist than others, but organizers observed no standing water or mud in the area at either of the stages. Moreover, the DJs, musicians and technicians experienced no adverse effect on equipment or electrical issues from the presence of mist.

Since adding the water stations, roving ambassadors and KoolBoss units, the organizers have seen an overall reduction in heat-related illnesses. Staff members in charge of the atomized mist equipment say that when they approach the machines to turn on the mist, people are excited and thankful.

"KoolBoss is an essential addition to any summer festival."

“We are really happy with how well the machines work and will use them for Electric Zoo events in the foreseeable future,” Jansen concluded. “We’ve already been using them at other events that we organize, such as the Rock in Rio festival in Las Vegas. Even though that event is in springtime, it’s still the Nevada desert, so it can get extremely hot, as well."

BossTek is a global leader in the design and manufacturing of customized equipment utilizing atomized mist technology for crowd cooling, dust suppression and odor management. The firm’s staff helps customers analyze needs, working environments and other factors to ensure successful performance under real-world conditions. Operators have found the units are far more effective and efficient than the use of other open-air cooling options such as hoses and sprinklers. BossTek equipment can be purchased outright or rented from an extensive fleet. bosstek.com

Receive a quick quote and talk to a specialist today to assist in finding your ideal crowd cooling solution! 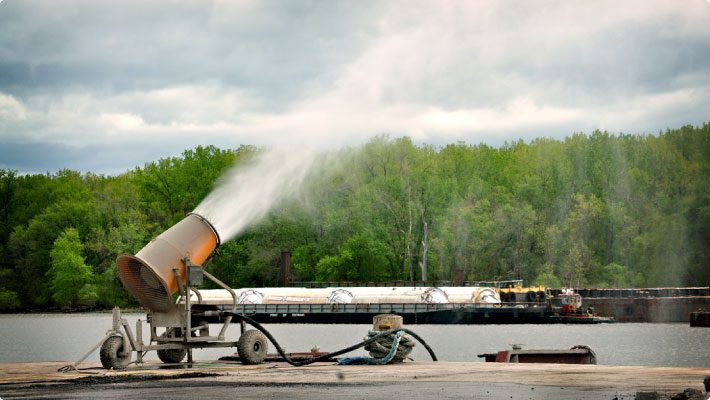 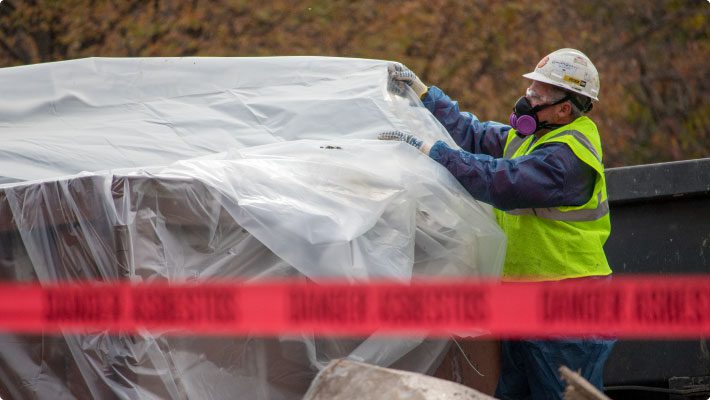